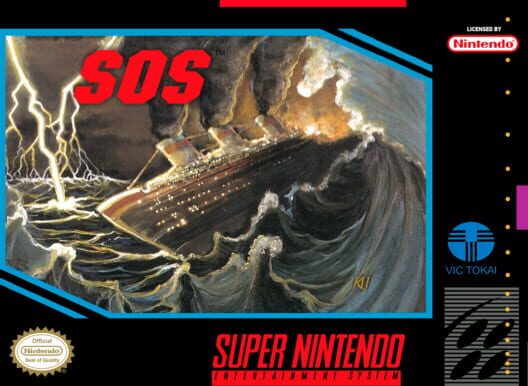 The date is Tuesday, September 13th, 1921. It's a stormy night, and the luxury ocean liner "Lady Crithania" is about to be capsized by an enormous wave. Many of its crew and its 2300 passengers will be killed outright in the initial overturning; in the transfigured catastrophic ship environment, most of the remainder will be unable to locate, reach and secure a safe exit from the sinking ship before it floods entirely. Will you?

Inspired by Paul Gallico's 1969 novel The Poseidon Adventure, this game puts the player in the shoes of one of four denizens of the fated vessel: Capris Wisher, architect; Redwin Gardener, counselor; Luke Haines, sailor; or Jeffrey Howell, doctor. Each of these gentlemen possess certain exclusive skills and distinct backstories and motivations -- a successful strategy toward winning the game will vary greatly depending on which character you initially select to play. And just how is the game won?

Here's a hint: don't be on the ship when it goes down for the last time. Accomplishing this demands mastery of a new skill hitherto untapped by its platform-game spiritual predecessors Prince of Persia and Flashback: exploring and navigating the ship in both an upright and an upside-down position, as well as many of the gradiated permutations between -- thanks to dizzying Mode 7 abuse, the game environment will tip, tilt and skew at predictable (and predictably inconvenient) intervals, granting access to some hitherto unreachable areas (those doors at floor level are of little use when you're on the ceiling!) while denying access to other portions of the ship you perhaps intended to go back through. You're going to need to recognize where you can and can't -- yet -- reach, and make a note to revisit when the pendulum swings the other way.

You're not going to make it out on your own. A successful evacuation is going to require the assistance of other survivors. Supposing you can find ( -- and reach!) them, you're still going to have to safely lead them past obstacles and hazards (as the ship flip-flops on its way to Davy Jones' Locker)... and as with all NPCs, they're slower and less agile than you, necessitating plotting out the simplest, safest course possible (... given the circumstances.) Which of the endings you conclude with will be determined by who you rescue and how many of them there are -- but I'm sure you'll have your hands full the first few dozen play-throughs just staying alive and trying to figure out how to get to where you're supposed to be going.

Did I mention there's a time limit of one measly hour? For once, it's your friend; since your injury in this dangerous and unpredictable environment is so frequent and, indeed, inevitable, death has been replaced by a deduction of 5 minutes from the time remaining -- but no matter how safe and dry a hidey-hole you manage to find, when the countdown reaches zero, it's game over.

Hope you packed a towel!